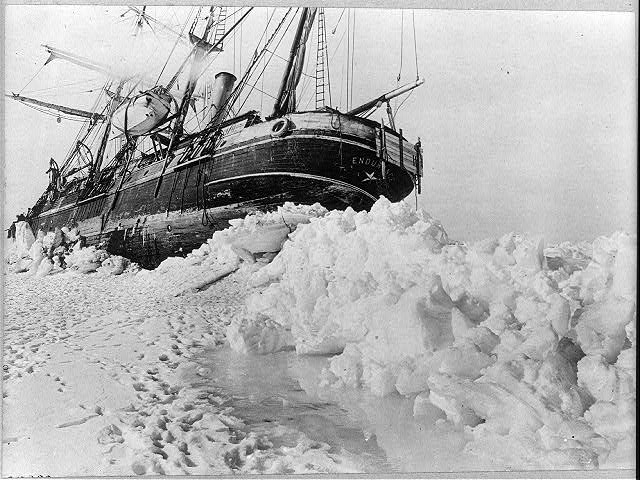 In 1907, the Briton Sir Ernest Shackleton advertised for volunteers for an Antarctic expedition to "conquer" the South Pole. Shackleton was able to motivate 27 men to set sail with him.

After the South Pole was first reached by the Norwegian Roald Amundsen in 1911, Sir Ernest Shackleton announced in December 1913 that he wanted to cross Antarctica – by sea.
Nobody before him had dared to do that. Shackleton's sailing ship ENDURANCE (in English: perseverance) – the name could not have been chosen better – left the British port of Plymouth on August 8, 1914. For almost two years the world would not hear from the ENDURANCE and her crew.


Shackleton found the Weddell Sea, the entrance to his target, covered in ice. The attempt to break through the ice sheet failed with around 2,000 kilometers to go.
On January 29, 1915, the adventurers were finally stuck with 29 men and 69 dogs at temperatures down to -26 degrees. The ship was trapped by the pack ice. The last hope that the ship would get out of the ice was dashed when, eleven months later, the ice masses piling up crushed the ship's hull.
On November 21, 1915, the Endurance was swallowed up by ice and sea tides.

"Nothing can destroy a man more than seeing his dreams evaporate. On the other hand, he (Ernest Shackleton) realized there was another goal now. He said to himself, if I can't cross the continent, at least will I bring back my people alive. Remember, Antarctica was littered with dead bodies. This almost fanatical desire to get his people back alive became his driving force – it was the only thing he cared about.
This shift in purpose from what you set out to do to just squirming out of defeat is an effort that has broken many men.
It did not break Shackleton."
(Roland Huntford Polar historian, journalist and author)

How Shackleton's crew saved themselves and why the journey went down in history as an example of human endurance, the importance of a team and its leadership personality, and an irrepressible will to survive 635 days in the ice can be watched here for free. The Australian participant, cameraman Frank Hurley, left behind more than 100 photos and extensive film material of the team's incredible survival performance – material that fascinates with its authenticity and initiated the documentary film "Verschollen im Packeis".
The documentary film won several awards, audience awards in Aspen and Florida, the film critics' award in Chicago and awards at festivals in Hawaii, Portland and Seattle.

This BBC video shows how well the ENDURANCE is in good condition. It was found after 107 years – on the 100th anniversary of Shackleton's death – at a depth of over 3,000 meters. Thanks to the Antarctic Treaty, which stipulates that uninhabited Antarctica between 60 and 90 degrees south latitude is reserved for peaceful use only – particularly scientific research – it must not be touched or anything salvaged from it. So it still lives up to its name ENDURANCE after more than 100 years, while the "Shackleton management style" is picked up in many management books.

"At a time when our securities are bursting like the bars of endurance," says the Times, "we long for leaders who will guide us through all dangers in a healthy and humane way (...)." while Brand Eins adds: "All of this is at least as irrational as the ambition that drove Shackleton to the South Pole again and again 90 years ago. But it's also kind of human. Shackleton is just exactly the kind of hero that we urgently need right now."