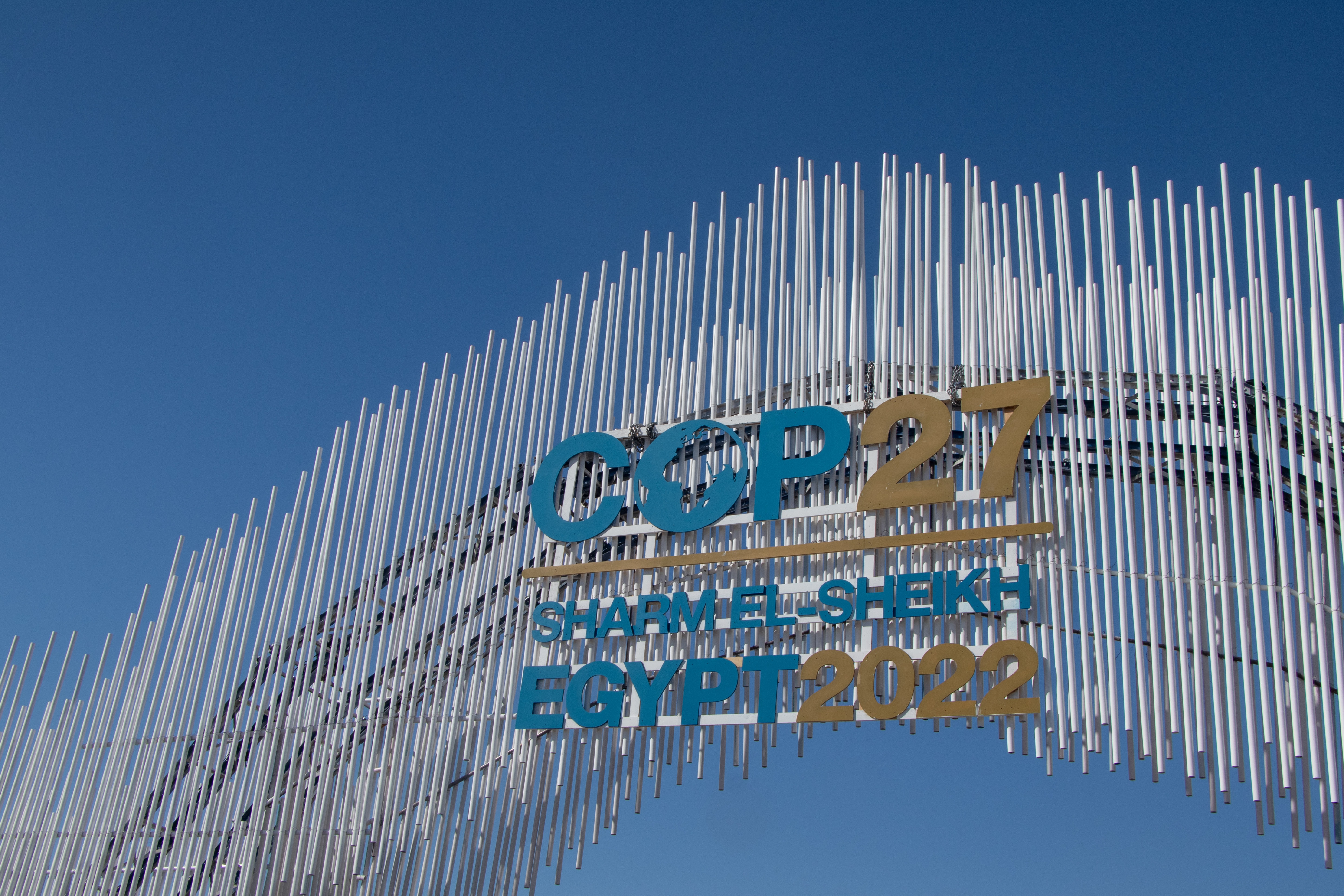 COP27 revisited: Unprofessional management, disappointment and a glimmer of hope

With our senior expert Peter Höppe, we have a proven COP expert in our own ranks. Höppe, professor for biometeorology, expert for climate change and environmental risk assessment, former climate council of the Bavarian state government, founder and honorary chair of MCII and 14-time COP participant himself, looks back skeptically on the 27th COP in Sharm El-Sheikh. His impression: "The COP was characterized by poor organization and blockades, in some cases there was more regression than progress". In an interview, he explained to us what bothered him, where he sees a need for action and which ideas he would like to uncover that had been blown away by the desert sand.

Prof. Höppe, which focal points have you identified at this 27th COP?

For me, there are three main topics that shaped this year's COP: First of all, the general conditions. Never before has it been so difficult for participants – I’m talking mainly about activists, members of NGOs, young people – to travel to the COP. We have heard of hotel bookings being canceled at short notice, of horrendous prices for hotel rooms, of surveillance and obstruction by the Egyptian secret service. Something like this shouldn't and mustn't happen at a world conference under the umbrella of the UN. Another point of criticism: the unprofessional preparation and conduct of the meetings by the Egyptian negotiator. The basic requirements were therefore already extremely bad. In the run-up, great hopes had been placed in the host Egypt. The COP had not been held in a developing country for a long time and the agenda well known mainly focused on issues that affected developing countries. The conditions would have been favorable to further promote the relevant topics here, also in own interest.

The second major focus was on the topic of mitigation¹. Actually, the goals from the Paris Agreement should be sharpened at the COP27, but the opposite was the case. Suddenly there was another discussion as to whether the 1.5 degree limit was still tenable. As a reminder: the 1.5 degree limit was set in 2015 on the initiative of small island states alongside the 2 degree limit that is binding under international law. Even if the promises made in Paris had been kept – which is de facto not the case so far – we would be heading for around 2.6 degrees of global warming today. At the moment we are even on a path well above it. The urgently needed tightening of the emission reduction targets has now been postponed again, to 2025. Another disappointment for me was that the countries that had not yet shown any commitment to a path to CO2 neutrality again did not introduce their own ambitious targets. Instead, the oil-producing countries, supported by China, confirmed the gradual phase-out of coal. However, oil and gas are not further mentioned in the final declaration. In my opinion, a clear step backwards.

The third major focus was on the subject of "Loss and Damage"². Many media reports stated that this item had landed on the agenda for the first time. But this is not correct. As early as 2009, at the failed conference in Copenhagen, the industrialized countries undertook to make 100 billion dollars a year in support payments available for developing countries from 2020 onwards. The following year, “Loss and Damage” – also under this name – was launched at the climate summit in Cancún and further developed in Warsaw in 2013. So they have been dealing with it for a while. The developing countries are rightly getting impatient because they have been promised something they didn't receive. The 100 billion have not yet come about, depending on the calculation one comes to 50, at most 70 billion in additional payments. Some countries simply factor in their foreign aid spending to polish their balance sheets.

Let's stay with your specialty "Loss and Damage" for a moment. In 2005 you were the initiator and until 2021 the chairman of the MUNICH CLIMATE INSURANCE INITIATIVE (MCII), which has lobbied for insurance-based climate adaptation solutions for poorer countries for many years. Why do you think it is so difficult to come to an agreement here and finally get a “loss and damage” fund off the ground?

The fund was approved, but no one knows how the mechanism will work. And there are many unanswered questions: who should pay in, how should the contributions be calculated? In my opinion, historical climate responsibility should be taken as a basis here, i. e. the amounts of CO2 that each country has historically accumulated into the atmosphere. What timeframe is the calculation based on? I would suggest as a starting date when CO2 emissions were known to cause harm, around 1990. If 1990 is chosen, the current main emitter, China, would have to be particularly held accountable. Or do you go even further back? Then it would hit the old industrial nations of Western Europe and the USA, the countries with historically still the highest emissions of CO2. There are dozens of different approaches here. Let's assume that we would include the data from the beginning of industrialization in the calculation, then the USA would have a share of 25.5 %, the EU 27 17.8 % and China would still have to account for a share of 13.6 % % of the anthropogenic CO2 molecules in the atmosphere. So China cannot claim not to be responsible.

I see a special responsibility within the EU for Germany, which was in the fast lane at this summit and tried to push a lot. Germany is responsible for 6 % of the global accumulated CO2 emissions with a population share of 1 %. So we also have a disproportionate amount of responsibility. If Germany were to take on 6 % of the payments, that would be fair in my opinion. It would be even fairer to fix the payments proportionally to the current difference to the worldwide average per capita emissions. I find it irresponsible that China, as a major CO2 emitter, refuses to be assigned to the donor countries and is still listed as a developing country, even though it is the world's second largest economy. Incidentally, some COP participants with whom I am in contact suspect that it could take up to 4 - 5 years before the "Loss and Damage" fund even has rules and until it is clear how it works. So far the only positive outcome of COP27 is a farce.

Finally, to mention one more positive thing: What I endorse – and here too Germany played a leading role – is the decision on the Global Shields³, which was initiated under Germany's G7 Presidency and officially launched on November 14th at the COP. Denmark is also playing a pioneering role, being the first country to agree to pay 100 million crowns (approx. 13 million euros) to the Sahel zone. Germany also surprised me positively, payments of 170 million euros were promised. In total, the Global Shield has so far been worth 240 million euros and can provide urgently needed emergency aid in an emergency. There are still a few rules to be clarified here, but the project is much more advanced than the "Loss and Damage" fund.

At the beginning you criticized the preparation and implementation of the COP. In your opinion, is the COP still up-to-date or does it need a completely different format?

In my view, the conference should not be held every year. In any case, the goal-oriented work does not take place during, but between the COPs. Perhaps the nations that really want to make a difference, as suggested by the G7 and leading voices, should join forces in an "alliance of the willing". You could work out binding plans and then try to get others involved. In return, the “unwilling” could be subject to punitive tariffs. Unfortunately, this “will”, which we so urgently need, is directly tied to the political views of the current head of state, so this alliance is by no means stable either. Furthermore, I think the principle of unanimity at the COPs is no longer sustainable, because it always comes down to the lowest common denominator and one country is enough to block everything. The irony behind this: Unanimity would also be needed to abolish the unanimity principle. So maybe you have to conceptualize the whole thing completely differently in order to create new rules.

What conclusion do you draw, what hopes and goals do you have personally?

I hope that Germany and the EU will continue to play a leading role in climate protection, but also in adaptation measures. However, if we are not able to meet our climate targets ourselves, it will of course be difficult to be a credible role model. The war is also having a very negative impact on climate efforts. Russia is in the process of burning excess gas that cannot be sold due to the import boycott. Madness! But that spurs me on to get even more involved in the future and to help get out of this valley again.

I see the greatest challenge in getting China on a more cooperative path. Actually, China has always been climate-conscious and has also invested a lot in renewable energies. The peak of coal combustion has probably already been reached and the emissions from it are slowly decreasing. However, traffic continues to increase and I doubt whether the targeted emissions peak of 2030 is still ripe for a statement. That will depend heavily on economic developments. Traffic is also an issue here in Germany. We have far too few e-cars on the road, the charging station situation has not yet been resolved, which is why many hesitate to buy an e-vehicle. The large SUV-like e-cars are anything but environmentally friendly. Electromobility makes sense when we drive small and light cars. The more kilos that have to be moved, the larger and heavier and therefore energy-guzzling batteries are required.

In 2008 / 2009, I helped initiate the industrial green electricity initiative for DESERTEC (DII). I think that would be part of the solution, because it's clear: in the future we'll need a lot more electricity that we can't generate efficiently in our limited space. It would therefore be advantageous to have solar and wind power plants in the Sahara and, in addition to electricity, also to produce green hydrogen and pump it to Europe via pipelines. Unfortunately, this initiative fell victim to the Arab Spring, nobody wanted to invest in the region anymore, then the economic crisis hit Greece and the southern European countries and the ambitious plans disappeared into the drawer. However, I am confident that these plans will soon be brought out again, also because it makes economic sense. We will see in Europe that this will enable us to achieve the climate goals more easily and more cost-effectively.

Prof. Höppe, thank you very much for the interview.

¹In climate policy, this means reducing greenhouse gas emissions with the aim of limiting the global rise in temperatures.

²Loss and Damage represents loss and damage caused by climate change, whether due to sudden extreme weather events such as hurricanes or slow processes such as sea level rise. This also includes an accumulation of floods or droughts. In view of the still inadequate climate protection, the importance and explosiveness of this topic is increasing.